Tell me about “immunity” and how it pertains to the family and juvenile dependency courts. 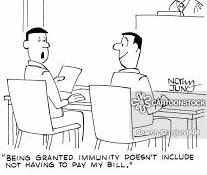 17 Oct Tell me about “immunity” and how it pertains to the family and juvenile dependency courts.

Posted at 06:27h in Promote settlement in our family courts by ending the AFCC by Wylmina Hettinga

There are different types of immunity.

In the Bible, in hundreds of places of some form or another, the word sovereign appears. God states, “I am the sovereign God” and people call God sovereign, unquestionable, and unaccountable to all. We are not going to debate “Sovereign Immunity”.

In earthly law, in hundreds of places, the words “absolute immunity” appear. The Supreme Court of the United States has consistently held that certain officials deserve some type of immunity from lawsuits to protect them from “potentially disabling threats of liability.” Whether or not “absolute immunity” shields these officials from criminal and civil liability is beyond the scope of this blog, so we are not going to debate “Absolute Immunity” either. For the record, we are not lawyers and this is not legal advice (NALNLA)

Judges (criminal, civil, family, juvenile dependency court, traffic, etc.) have a form of “absolute immunity” from being sued, being questioned, or being held accountable, called “judicial immunity”. This type of immunity does not shield a judge from being criminally prosecuted and RaiseYourRights is keeping a running account called “Bad Judge” on Facebook of judges held accountable for criminal acts.

“Judicial Immunity” as we understand it, only applies to civil matters and as far as we know, there hasn’t been a single judge in California, or in the United States, who has been held responsible for civil actions in his/her official judicial role. No one has sued a judge civilly for money. Judges’ orders, however, have been suspended or changed by appellate and federal courts.

“Quasi-Judicial Immunity” shields those who are lawfully acting in a judicial role (but who are not judges) from liability, such as court commissioners. It also shields those appointed by a judge to assist him/her in making a decision about a child, such as a psychologist, mediator, attorney/GAL for minor children, custody evaluator, etc.. Obviously, the judge can question these people or hold them accountable, but that is not likely. It is also unlikely that you will be able to sue one of them. It is unlikely that your local district attorney will bring criminal charges against any of them, if they claim to be lawfully acting in a role to “assist” your judge in making decisions. So despite all of the times you hear about parents suing someone in federal court, who has “Judicial Immunity” or “Quasi-Judicial Immunity”, it is very unlikely. Most likely, their complaint was dismissed before it was even heard.

Then there is an overall “11th Amendment Immunity” for your state and your state employees.  The 11th Amendment says “The Judicial power of the United States shall not be construed to extend to any suit in law or equity, commenced or prosecuted against one of the United States by Citizens of another State, or by Citizens or Subjects of any Foreign State” which was loosely translated to mean that you can’t sue your state as an entity, or employees of your state including social workers, in a federal court. The 11th Amendment follows the 10th Amendment which says “The powers not delegated to the United States by the Constitution, nor prohibited by it to the States, are reserved to the States respectively, or to the people.” This loosely translated means that the federal government retain controls of some things, and your state has control over pretty much everything else that happens inside of its borders. The states are demonstrating this to US citizens by the current lockdowns, restraining people to their homes, and closing businesses that operate inside of their borders. Whether or not this is unwarranted governmental interference (UGI) is not going to be debated in this blog unless it pertains to family and juvenile dependency courts, then we are here to #PreventUGI with jury trial rights. Basically, your state itself and its employees have some immunity too.

How can parents find justice when their children were wrongfully taken away from them?  Well, if you are not a US citizen it is a lot easier.  See this blog here.  If you are a US citizen, in 1979, federal CIVIL code was amended to include 42 United States Code, Section 1983 (Section 1983) allowing you to sue certain individuals or entities who would otherwise have immunity from your lawsuit. Section 1983 even allows you to seek relief from a judge as long as you aren’t looking back at the damages. Instead, you need to look forward find the solution to stop the unwarranted governmental interference in your life and the lives of your children (NALNLA). However, most likely after you file this civil lawsuit, it will be dismissed because your family law case, or your CPS/dependency case started in a state court and the federal court most likely won’t review state court decision.  You need to appeal them first (NALNLA).

At the end of 1995, as a result of lobbying efforts by members of RaiseYourRights, the California Government Code, Title I, Division 3.6, Part 2, Chapter I, General Provisions Relating to Liability, Article 3, Liability of Public Employees, Section 820.21 was added which states, “Notwithstanding any other provision of the law, the civil immunity of juvenile court social workers, child protections workers, and other public employees authorized to initiate or conduct investigations or proceedings pursuant to Chapter 2 (commencing with Section 200) of Part I Division 2 of the Welfare and Institutions Code shall not extend to any of the following, if committed with malice: (1) Perjury. (2) Fabrication of evidence. (3) Failure to disclose exculpatory evidence. (4) Obtaining evidence by duress, as defined in Section 1569 of the CIVIL Code, fraud, as defined in either Section 1572 or Section 1573 of the Civil Code, or under that is carried on by the PERSON described in subdivision (1) with a willful and conscious disregard of the rights and safety of others. This loosely translated means that you need to be able to prove malice in order to be able to overcome a social worker’s immunity and thus be able to sue that social worker for damages (NALNLA).

What is the bottom line in order for parents to have every layer of protection available to them, able to keep legal rights to their own child, from the State of California or the other parent? The place where it all began, with jury trial rights in our family and juvenile dependency courts like parents in Texas have, in order to be free, #PreventUGI.

Ironically, on a side note, the US is currently preventing British governmental interference in the life of Anne Sacoolas. She is the wife of a diplomat so she has warranted diplomatic immunity. The Brits are trying to hold Anne accountable for driving on the wrong side of the road and killing a U.K. teenager. Whether or not the Brit’s have a case, or “warranted” interference is beyond the scope of this blog….but ironically the US and RaiseYourRights are both trying to #PreventUGI.

Is there such a thing as “Jury Nullification?”

Tell me about the California “Litigation Privilege” or why it is “Legal to Lie” in court?