Why did Chief Justice John Roberts tell all US citizens to be thankful for “Judicial Independence”? 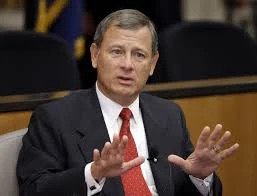 11 Nov Why did Chief Justice John Roberts tell all US citizens to be thankful for “Judicial Independence”?

Posted at 08:17h in Promote settlement in our family courts by ending the AFCC by Wylmina Hettinga

Justice Amy Coney Barrett recently followed up with “It is your Constitution that establishes the rule of law and the judicial independence that is so central to it”. Now this comment is true. We are bound by the “rule of law” or laws created by the federal government and the State of California. The other part is also true, “Judicial independence is so central to it.”

I believe that these justices of the United States Supreme Court, or SCOTUS, and other federal and state court justices (especially criminal courts) support this statement about “judicial independence”. However, our recent US Presidents have claimed that federal justices are influenced by their political party affiliations and the collusion between state court judges in the California family and juvenile dependency court judges and court appointed “witnesses” is rampant.  Our state court judges are highly influenced by their chosen “witnesses” who is almost always, also, an AFCC member.

Judicial independence is required by judges so that they make fair and competent decisions in family and juvenile dependency courts without interference from people other than the parents themselves, their attorneys, their evidence, their witnesses, etc. Until we remove the control the AFCC, or the Association of Family and Conciliation Courts or “the AFCCnet effect” as we like to call it, almost all of these judges in these courtrooms can not, and should not, claim “judicial independence”.  The colluding self-serving members of the AFCC are judges, attorneys, psychologists, social workers, child custody evaluators, court appointed guardian ad litems and Minor’s “Counsel” aka more attorneys, supervised visitation providers, etc.

The reason your church, school, local newspapers, California county senator or assembly member, mayor of your city, journalist, neighbor, friends, family, pastor, social media groups (Facebook, Twitter, Instagram, etc.) shouldn’t have any influence on your family law or dependency court case is because they are not witnesses to your case or brought into court to be questioned by you and the other side. If they are, that of course is a different story. For example, a judge/jury is not allowed to independently go to a crime scene without both sides being present in order to investigate evidence. You can tell from this video how bad it has really become in our family and juvenile dependency courts. These court lost the “judicial independence” that is “so central” to the “rule of law” a long time ago.

Because RaiseYourRights and other organizations have been attacking the lack of judicial independence in California family and juvenile dependency court, look for Chief Justice’s annual year-end report to once again include family and juvenile dependency courts in his overall “judicial independence” speech meanwhile, #NoAFCC, #PreventUGI (unwarranted governmental interference), #ResolveConflictQuickly.