But I was never found guilty of anything, why did my judge take away my legal rights to my child? 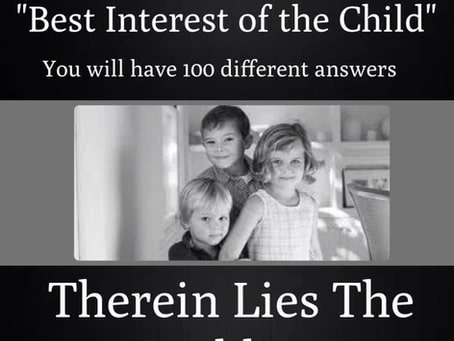 05 Oct But I was never found guilty of anything, why did my judge take away my legal rights to my child?

Posted at 07:22h in Promote settlement in our family courts by ending the AFCC by Wylmina Hettinga

You were essentially found guilty, it was just under a low low standard of evidence. Per Judge Leslie Nichols, retired from the Santa Clara County “Family” Court: “The issues can all be adjudicated here under a different standard of proof as relevant to the welfare of the children.” He went on to explain that the criminal courts, civil courts, traffic courts and small claims courts use much higher standards of evidence (beyond a reasonable doubt, preponderance of the evidence, one side’s evidence is more likely to have occurred than the other side’s, etc.) so finding you guilty in one of those courtrooms is difficult to do without sufficient evidence presented against you. However, in family and juvenile dependency courts (arguably the most important courts in our nation) Judge Nichols went on to explain that “here it’s an entirely different inquiry, not guilt, but ‘Best Interest of the Child'”.  This standard of evidence essentially means anything can and will be used against you. The evidence used against you can be anything a judge wants it to be. Hearsay evidence is the norm in family and juvenile dependency courts.

The “Best Interest of the Child” standard is vague. It is overbroad and thus it is an unconstitutional standard of evidence. California should not be able to use it to because laws that restrict Constitutional rights cannot be vague or overbroad (all-encompassing). It simply doesn’t pass strict scrutiny as it is required to do when infringing on a constitutional right. Hearsay, false accusations, perjury, falsified documents, third party communications without the person being present, expert witnesses testimony who never appear to be questioned, etc. are all normally not admitted as evidence  to be used against you but under this low low standard in our family and juvenile dependency courts, it is used as the only evidence against you.

RaiseYourRights is still in the process of squashing the “Keep Families Together Act” introduced by Sen. Dian Feinstein in 2018 and a similar one followed up with by Sen. Kamala Harris to introduce California’s “Best Interest of the Child” standard into federal law as well.  The “Keep Families Together Act” unbelievably states that the Department of Homeland Security (DHS), Justice, and Health and Human Services shall not separate a child from a parent of legal guardian” UNLESS “a STATE child welfare agency of court determines it is in the child’s best interest to be removed.” Essentially this law would allow every child who crosses our borders to be removed from their parent or guardian because an unrelated American parent supposedly can do a better job of parenting that child. What’s love got to do with it? Parents in the US need jury trial rights to overcome family and juvenile dependency courts finding them guilty with essentially no real evidence presented against them at all.  Help RaiseYourRights prevent unwarranted governmental interference in families (aka UGI).